Top Posts
Talk to books: All you need to know...
Top 5 News Related to Electronic Industry |...
5 Steps You Must Take to Be Successful...
Making of The Artificial Eye best to know...
Increase CPC for your Website | make money...
15 Important Travel Techs For Travelers | 2018
What Is Bitcoin and Blockchain Technology? A Quick...
Once homeless, now on his way to Harvard...
U.S. Energy infrastructure On Cyber-Security after Alert Issued...
Why I feel so alone | Does technology...
Radar-Antenna

Satellite Communication | What is the role of Transponder in SC

The satellite amplifies the information signal taking care of attenuation in the signal and then transmits it to the earth station again. Considering the limitation of “line of sight” communication the transmission antenna is mounted on a satellite. These satellites are three in number transmitted into space at the altitude of 22300 miles or 35900km around the globe, which are connected to each other at 1200 angle which cover3600. Although satellite communication system is very expensive the advantage of communicating all over the world at high speed is more important.

In the following figure a satellite communication system is mentioned, where the role of a transponder is clearly magnified.

Satellite communication system can be consists of the following possible parts

A Transponder is Consists of the Following Parts

The input multiplexer receives 4GHz from the amplifier. Which multiplex the channels and frequency band. Then the signal is given to the TWT amplifier which is a specially designed high power amplifier for the microwaves. The output multiplexer converts these signals into downlink frequencies (3.7GHz to 4.2GHz) and transmits it towards the earth station. 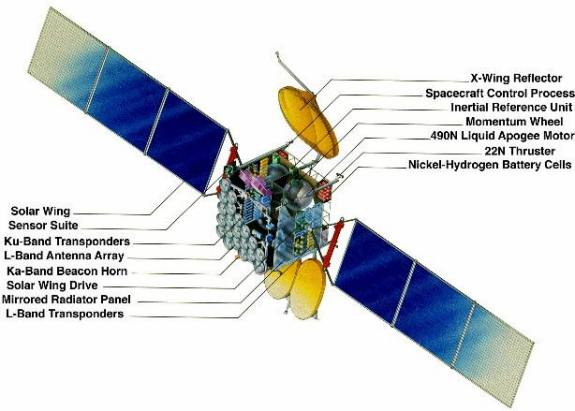