Top Posts
Why I feel so alone | Does technology...
Cyber Security Concerns For Bitcoin as the Price...
Once homeless, now on his way to Harvard...
Top 10 things you must know about Clean...
Making of The Artificial Eye best to know...
How Tesla is Disrupting the Entire Automotive Industry...
Increase CPC for your Website | make money...
Apple Watch launches a new ECG Feature to...
Revolution In Electric Vehicle upto 2018 | Electric...
Crises of the Semi-conductor industry and its Root...
Radar-Antenna 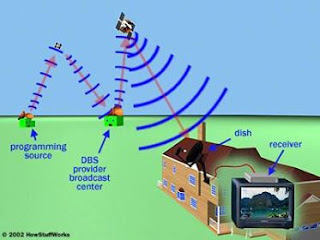 Every day we blindly use modern technology in alignment with our needs.. a toaster, radio, camera, doorbell even our TV’s without a clear idea of the electrical hardships that made “Today”… So I decided to write an article on one of the most common mechanisms “Satellite TV’s” for the students of electronics and communication eng.

I am going to verify a clear cut but simple satellite phenomenon of direct broadcasting.

Of course, a Satellite TV works by receiving the video and audio signals broadcasted from geostationary satellites orbiting the earth. But it’s not that easy.. there are 5 major compartments which complete the mechanism.
1) Programming Sources: By Programming Sources I mean the TV networks on which you watch all your programs, these include networks such as HBO, ABC or CNN. These networks are paid by the satellite TV providers and this is the same case with the popular Cable TV as well. The providers do not directly broadcast the programs but pay various television services to do that job.
2) Broadcast Centers: The Broadcasting centers play the major role in transmission. These centers receive video and audio signals from a number of programming sources and emit these signals to satellites.
3) Satellites: The Geostationary Satellites 22,300 miles above the equator receive the signals from the various satellite TV centers and rebroadcasts them back to earth.
4) Viewers Dish: The purpose of the Dish is to receive all the signals coming from one or more satellites. There is a curve in the dish which serves the purpose of converting all the signals and focusing them to the feedhorn at the front of the dish. The feed-horn transmits the signals to the LNB (low noise block) converter through which the signal is amplified and passed to the IFL cable to the receiver.
5) Receiver: The receiver decodes the signals to video and sound to be viewed on out TV sets also allowing you to change the channels. The two major Satellite TV providers are DirectTV and the Dish Network.

Hopefully, this article will help University students who are doing bachelor or masters in electronics and communication eng.

Why LED Bulbs Are Preferable as compare to incandescent bulbs