Top Posts
Why I feel so alone | Does technology...
Increase CPC for your Website | make money...
What’s Next | NASA Sending a Tiny Helicopter...
Apple Watch launches a new ECG Feature to...
Revolution In Electric Vehicle upto 2018 | Electric...
Making of The Artificial Eye best to know...
15 Important Travel Techs For Travelers | 2018
Cyber Security Concerns For Bitcoin as the Price...
Top 10 things you must know about Clean...
What does a quantum computer do? | Latest...
computing

Li-Fi (also known as light fidelity) is a technology for the wireless transmission of data between devices Li-Fi uses light as a medium for transmission of data. LED lamps are the source used for encoding data by switching the light on and off during regular intervals to create a binary code. This is transmitted to the other end where the receiver decides it. Li-Fi has a huge potential in data transmission since it uses simple LED bulbs to transmit data.

Components of a Li-Fi System:

1: A transmitter (most likely a LED lamp)

2: A receiver (used to decode the received data)

The term Li-Fi was first coined by the University of Edinburgh, however, this technology was first introduced by Herald Has, a German professor, and physicist. He introduced and demonstrated it at a TED talk in July 2011. He believed light bulbs could act as wireless routers for Data transmission. His demonstration showed how changes in the amplitude of a light bulb at high speeds can be used for energy transmission. He demonstrated the use of LED for the transmission of a high definition video and then showed the same video to the audience. He also formed a company later on by the name of pureLiFi.  Since then the use of this wireless technology has increased, now being deployed in more than 20 countries.

Li-Fi and Wi-Fi are both used for wireless communication and transmission of data. However, they differ in the medium used. Wi-Fi, for example, uses radio waves transmitted over modems whereas on the other hand Li-Fi uses visible light from LED bulbs for transmission and receiving of data.

Li-Fi is a VLC (visible light communication) system. It uses a photo Detector (photodiode) to detect incoming signals and decode the data received into digital form. The LED light bulb uses a fast alternating stream of dim and bright signals that are invisible to the human eye. 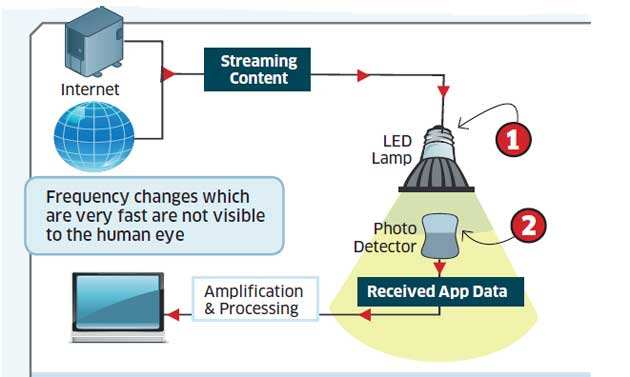 There are numerous applications of Li-Fi in use today and are increasing day by day. Here we will discuss a few of these applications. 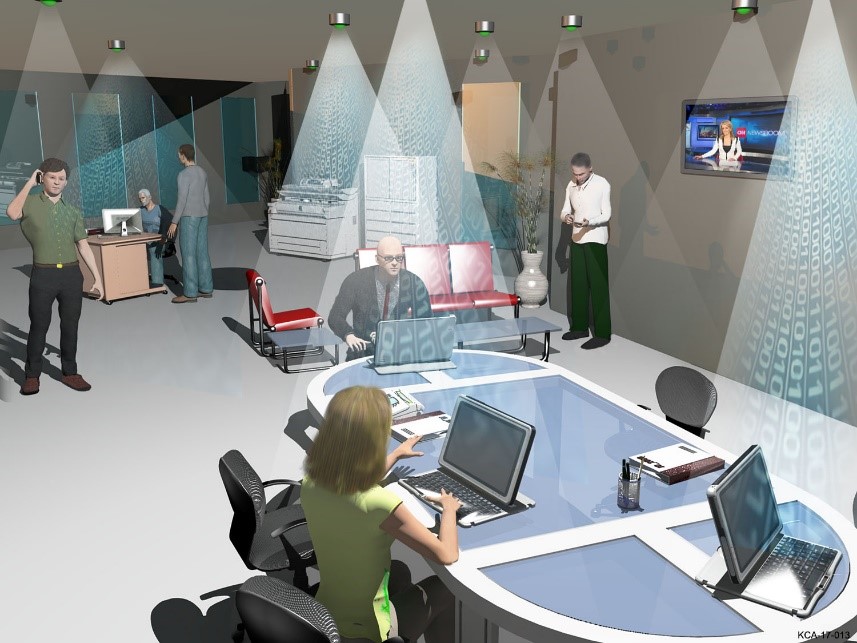 Li-Fi is perfect for use in military bases. This is because of the confinement of the data transmitted to a small area which cannot be penetrated by outside sources. Also, it does not require any complex infrastructure for its application and is simple to use.

2: Use in Traffic Lights:

Li-Fi can be used in traffic lights to update drivers on weather conditions and traffic information so they can have a smooth journey on the road. Especially useful for sending critical information.

3: Use in Underwater Communication:

AR is being used at a greater rate than before. They are used in institutions for better customer service. The Use of Wi-Fi in such cases is problematic as it can lag with more customers connected to it. On the other hand, Li-Fi is much faster and can lead to uninterrupted AR transmission. Another advantage is that the light used is already illuminating the institution. Once again, an efficient use of energy.

Urban areas are already using large quantities of LED bulbs and light sources. The Use if Li-Fi here is therefore very useful. This will not only connect more users in urban areas but will provide fast data to its customers.

The Uses of Li-Fi are endless. As of now, more than 20 countries are using LI-FI technology. Worldwide use of this alternative to Wi-Fi could prove to be revolutionary in the future.

Everything you need to know about the upcoming iPhone | September 2018

The New USB Type-C All You Need To...