Top Posts
Increase CPC for your Website | make money...
Making of The Artificial Eye best to know...
How Wireless Charging Works for smartphones | Circuit...
Apple Watch launches a new ECG Feature to...
Cyber Security Concerns For Bitcoin as the Price...
Why I feel so alone | Does technology...
Austin Texas is a next Future Tech giant...
Revolution In Electric Vehicle upto 2018 | Electric...
CTRL-Kit: The First Mind-Controlled Armband and its Demonstration
What Is Bitcoin and Blockchain Technology? A Quick...
computingRadar-Antenna

You must have experienced moments where your Wi-Fi speed drastically reduces down to that of a snail. This isn’t surprising considering the number of wireless devices we’ve become accustomed to using. Here we’ve listed some of the common issues that may be the culprit in such cases and how you can resolve them.

As we said before, our homes are filled with wireless devices, all part of the smart home automation trend. From smart plugs, smart bulbs, smart TV’s to Google Home Minis, each connected to one Wi-Fi network. Older routers just weren’t built to handle too many devices at once. With each device connected you’ll notice a drop in your Wi-Fi speed. The solution to this is quite simple, upgrade to a newer model. You can check out the UbiquitiUniFi or if you want something more budget-friendly you can try the UbiquitiAmpliFi, perfect for small homes 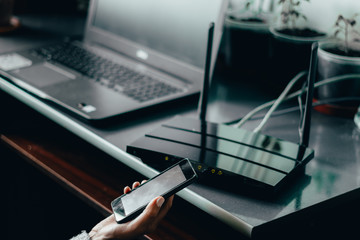 The next thing that could affect the speed of your Wi-Fi is the placement. Wi-Fi routers usually transmit either a 2.4GHz signal or a 5GHz signal. Although the 5GHz signal is faster, it cannot pass through concrete walls whereas the 2.4GHz can. The solution would be to position your router in an area where its signals would get minimum hindrances. 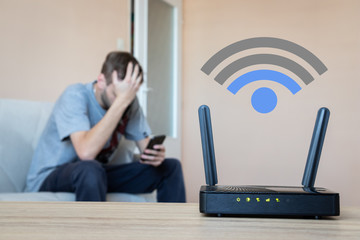 Now you’ll probably have multiple smartphones connected to your single Wi-Fi device. That and then you have computers, tablets, and gaming consoles, etc. which could be running apps in the background constantly updating themselves.

The solution could be to turn off any extra background apps draining data. Or if you want to prioritize certain activities so they are always performing at their best, you can use Quality of Service Settings. This way your router can make sure one prioritized device is running smoothly even with busy networks.

Sometimes it’s your old cabling causing the issue. Electrical cables usually last for fifty years or so whereas network cabling has several upgrades that affect the speed with which it carries data. You can check the carrying capacity by looking at the cable itself. You should see a “Cat” number specification on the cable.

Cat-5 is the oldest cable but it is still in use. Its performance is limited to 100 Mbps. Then we have Cat-5e which is probably the one most commonly used. It can carry around 1000 Mbps. Finally, we have Cat-6/6a which is the fastest network cabling in common usage. It can support around 10,000 Mbps (10 Gigabit). In case you have an old cable that could be slowing down your network it’s better to have it replaced by one of the faster options such as Cat-5e or Cat-6.

People will often use Powerline devices or Wi-Fi extenders. A Wi-Fi extender basically takes the Wi-Fi signal from your router and extends out to a longer distance. Similarly, Powerline adapters allow you to send network signals through power outlets. But in some cases, they make things worse by adding more interference. In this case, you should opt for an alternative method such as a Whole Home Mesh Wi-Fi system.

If you live in big cities, particularly apartment blocks you may have hundreds of Wi-Fi networks operating around you, all will take up space in the frequency bandwidth which can give you a congested Wi-Fi channel. For this you could change the channel number, some routers can do that for you. Devices that use Ethernet instead of Wi-Fi make better use of bandwidth.

The DNS (Domain Name System) server you use can also make a difference to your internet speed. DNS Servers act as a phone book for the Internet. It maintains a directory of domain names and translates them to IP addresses. So, when you type in a web address “www. *** .com” your ISP views the DNS for that domain and translates it into an IP address which it will direct you to. Often the default DNS server provided by your ISP can be quite slow. In this case, you can change your DNS server to one that will boost your speed. 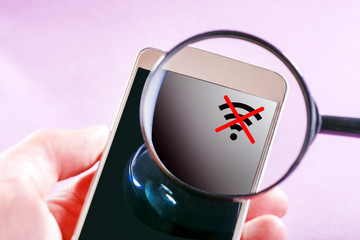 8. Bandwidth Throttling by your ISP

Bandwidth throttling is the intentional slowing or speeding of an internet service by an ISP. It is often used to regulate network traffic and minimize bandwidth congestion. You should have a good idea of what your typical internet speed is and check it regularly to see if it’s been reduced. One way to get around ISP throttling is to use a VPN in case you’re being throttled because your ISP has detected the use of file-sharing apps. There’s not much else you can do.

You may have come across this message on your router: “There may be devices in your wired network which might limit your in-home connectivity.” You may have a device connected that is acting up and could end up bringing your entire network down. The solution here is to unplug devices and try to find the culprit. Then, you could contact the manufacturer for assistance. Such errors were reported with the Nintendo Switch.

Does Leaving Your Laptop Plugged In Damage the Battery?