Top Posts
5 Steps You Must Take to Be Successful...
Talk to books: All you need to know...
Making of The Artificial Eye best to know...
15 Important Travel Techs For Travelers | 2018
Once homeless, now on his way to Harvard...
Increase CPC for your Website | make money...
U.S. Energy infrastructure On Cyber-Security after Alert Issued...
Why I feel so alone | Does technology...
What Is Bitcoin and Blockchain Technology? A Quick...
Top 5 News Related to Electronic Industry |...
Radar-Antenna

In the recent years, the demand for higher data rate services such as multimedia, voice, and data traffic over both wired and wireless links increased tremendously with the advancement of information and communication technology. To transfer a large amount of data required new modulation techniques which were not supported by the existing 3rd generation (3G) schemes such as CDMA 2000 and Wideband Code Division Multiple Access (WCDMA). Meanwhile, a form of multi-carrier modulation called Orthogonal Frequency Division Multiplexing (OFDM) received significant attention.
Some unique features offered by OFDM like its resistance to frequency selective fading make it comparable to single carrier systems. Usually, the data rate is increased by the single carrier systems with the expense of increased occupied bandwidth and decreased symbol duration. Therefore, wideband channels require complex equalizers to recover the original transmitted signal at the receiver side because these channels are very sensitive to frequency selective fading. OFDM splits the wide-band channel into a sequence of narrow-band channels that experience flat fading. Such arrangements then demands only single tap equalizers at the receiver side, reducing complexity significantly. Although, OFDM has many advantages over single carrier systems; however, it still suffers from many issues, i.e. sensitivity to carrier frequency offset and large Peak to Average Power Ratio(PAPR). The superposition of “N” independent equally spaced subcarriers at the Inverse FastFourier Transform (IFFT) at transmitter side produces large PAPR in time domain signal. If large PAPR is retained at transmitter side, it saturates High Power Amplifier (HPA) which in turn 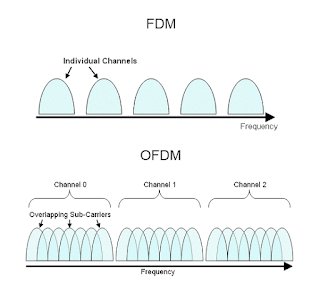 produces undesirable distortion and out-of-band radiation and also degrades the Bit Error Rate
(BER) performance at the receiver side. Therefore, it is essential to find a way of reducing large
PAPR that allows for a more efficient HPA.

How to interface HC-05 Bluetooth Module with Arduino