Top Posts
Why I feel so alone | Does technology...
What’s Next | NASA Sending a Tiny Helicopter...
Making of The Artificial Eye best to know...
Increase CPC for your Website | make money...
Apple Watch launches a new ECG Feature to...
Revolution In Electric Vehicle upto 2018 | Electric...
Cyber Security Concerns For Bitcoin as the Price...
Top 10 things you must know about Clean...
Once homeless, now on his way to Harvard...
Crises of the Semi-conductor industry and its Root...
Electrical Engineering

Introduction to Grid Station and How Electric power distribution Works ?

How AC Power is supplied from Generation Station to Consumers

As the power system scheme is consists of large of number conductors’ network between the powerhouse and consumer. This system is mainly divided into two parts i.e. transmission and distribution system. Both systems are subdivided into primary, secondary transmission system and primary, secondary distribution system. Nowadays power is transmitted in 3 phase 3 wire system but 3 phase 4 wire system is universally adopted for economical proportion.

The 11kv generated power is step upped with power transformer to 132kv and then transmitted at 3 phase, 3 wire overhead system to the load center. This forms the primary transmission system.

The primary transmission lines end at the boundaries of the cities receiving station. The voltage is reduced here to 33kv by step down transformers. From this station electric power is transmitted at 33kv by 3phase, 3 wire system to various grid station located at different location in the city. This forms secondary transmission system. 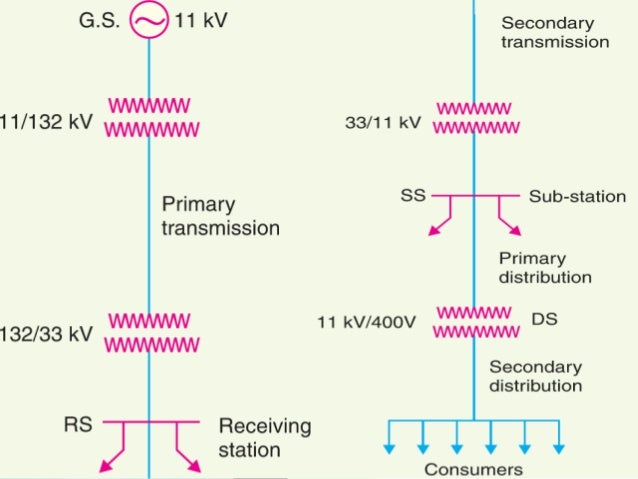 The secondary transmission lines terminate at substations. Where the voltage is reduced from 33kv to 11kv, 3phase, 3wire. These 11 kV lines run along the roadsides of the cities. This forms the primary distribution. Often the big consumers having demands more than 50kw are generally supplied power at 11kv directly. 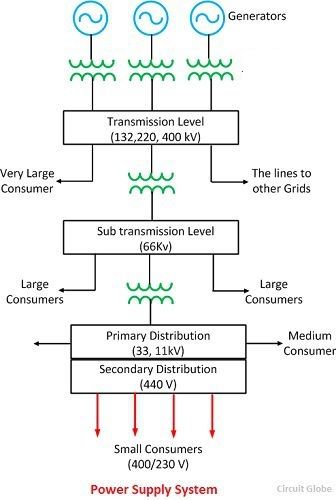 What is Capacitor & How are Electrolytic Capacitors Formed?

The Future is Here: How Advances in Electronics...

Importance of Electricity in our Daily lives and...

How The Corona Effect Can Influence the Overhead...