Top Posts
Increase CPC for your Website | make money...
Making of The Artificial Eye best to know...
How Wireless Charging Works for smartphones | Circuit...
Cyber Security Concerns For Bitcoin as the Price...
Apple Watch launches a new ECG Feature to...
Austin Texas is a next Future Tech giant...
Why I feel so alone | Does technology...
Revolution In Electric Vehicle upto 2018 | Electric...
Crises of the Semi-conductor industry and its Root...
E-mail: Tips and Secret Features Revealed For Professionals
Electrical Engineering

What are Overvoltages and its Causes in the Electrical Power Systems

In today’s article, we are going to know about the overvoltages and its causes. There are so many sources concerned with overvoltages like generators, transformers, and transmission lines. These over voltages can be caused by lightning, an opening of circuit breakers, the grounding of a conductor etc. These overvoltages may not be huge in magnitude but its effect can interrupt the protection system or devices connected in the system. Engineers always trying to limit and control the effect of over voltages on operating types of equipment. Now we are trying to find out the main causes of over voltages. How they can be generated and can affect the operating system.

these transients or surges are of temporary nature and short duration (a few hundred µs) but they cause over voltages on the power system. They originate from switching and from other causes but the most important transients are those which are generated from the natural lightning strokes on transmission lines. When lightning strikes a line, the surge rushes along the line and a flood of huge voltages rushes into the system which is capable of damaging every single protective and electrical appliances. 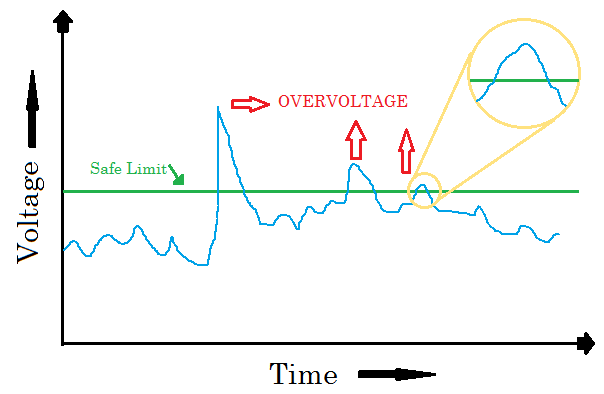 The above figure shows the lightning surge waveform. The voltage build-up along the x-axis and the time along the y-axis. It seems quite clear that the surge generates a very steep forward wave in a very short time which is called wavefront. This buildup is very rapid, being of the order of 1-5µs. While the back side called wave tail passes slowly compare to the wavefront. It takes a little more time than a steep wave.

Causes of over voltages

The over voltages on the power system can be broadly divided into two main categories.

Internal causes do not produce surges of large magnitude. Experience shows that internal surge hardly increases the system voltage to twice of the normal voltage.

The Future is Here: How Advances in Electronics...

Importance of Electricity in our Daily lives and...

Difference between Lightning vs Lightning Arrester in Electrical...