Top Posts
Why I feel so alone | Does technology...
Increase CPC for your Website | make money...
What’s Next | NASA Sending a Tiny Helicopter...
Revolution In Electric Vehicle upto 2018 | Electric...
Making of The Artificial Eye best to know...
Apple Watch launches a new ECG Feature to...
15 Important Travel Techs For Travelers | 2018
Google Duplex: Now you can book your appointments...
Cyber Security Concerns For Bitcoin as the Price...
Top 10 things you must know about Clean...
smartphones 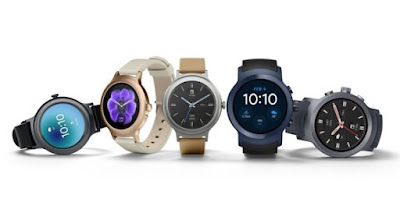 Cons:
Overview:
LG electronics is always ready to jump into the competitive market with its latest devices. It leaves no exception in the Android Smartwatch department either. Its latest products are its two high end devices “LG Watch Sport” and “LG Watch Style”. They come packed with Android wear 2.0 which has finally arrived the market, lets find out what improvements have been made and what LG has offered its consumers.
Design:
when it comes to the design its obvious that LG’s Style watch deserves the award. So far it is the slimmest Smartwatch in the market, it is lightweight and can be easily carried on the wrist. LG style comprises of a stainless steel case with removable leather straps which you can customize to your taste. But its too bad that in order achieve this slim stylish watch LG had to leave out some features. LG Sport on the contrary is a bit more bulkier and its plastic band is not removable; however it contains features which makes it the more powerful one from the two. Both watches are dust and water resistant and there display is covered with the protective Gorilla Glass 3.
LG sport has a rotating crown furnished on it which is used for navigating on the interface, alongside it lie two physical buttons which act as shortcuts (by default they take you to android play and Google fit Workout). Its larger size houses a heart rate monitor below it, a SIM Card for connectivity and microphones. The style misses out on the SIM card support, extra shortcut buttons, heart rate monitor and the android pay feature. LG style is more about its design and software.
Display:
The sport watch has 1.2 inch screen with a resolution of 48 x 480 pixels, comparatively Style has a smaller display of  1.2 inches and a resolution of 360 x 360 pixels. Both watches have a bright and punchy display which is easily readable even in direct sunlight. Sport gets extra credit for its faster and responsive display, and its larger screen is more useful for viewing long notifications and navigation.
Battery and Performance:
LG style boxes a 240 mAh battery which easily lasts for about 16-26 hours on the other hand Sport contains a larger 430 mAh battery which lasts for about 14-24 hours. The increase in consumption of battery in the Sport is mainly due to its larger size and extra hardware. Style contains 512 MB of RAM which is enough for performing the basics which it offers. Sport on the contrary contains a larger storage of 768 Mb, both watches don’t face any problem while uploading apps or notifications.
Style misses out on GPS, NFC, LTE, and the heart rate monitor but Sport offers everything including NFC, heart rate monitor, GPS, LTE, barometer and it is highly water proof allowing you to swim with it and take laps. Consumers love being able to take care of payments through android pay, Sport is the watch to get for them because now they will able to clear there payments using just there watch.
Android Wear 2.0:
Android wear 2.0 finally came out and is featured through LG’s Sport and Style watch. Google has brought out a number of updates in the wearable platform. Android wear 2.0 lets your watch work with and without your phone, Sport can completely be used independently just by a simple LTE connection. This time you can also access Googles Play Store on android wear, so now you can easily download apps and watch faces directly on your watch instead of first having to install it on your phone. By using Android wear APIs you can quickly access your health info like steps taken, weather info and notifications directly on the watches face. Android wear 2.0 is Googles successful effort to revolutionize android wear.
Features:
Processor: 1.2 /1.1 GHz Snapdragon chipset
Display size: 1.38 / 1.2 inches
Resolution: 480 x 480 / 360 x 360
RAM: 4 GB
Battery Capacity: 430 mAh / 240 mAh
Operating System: Android wear 2.0