Top Posts
Talk to books: All you need to know...
Top 5 News Related to Electronic Industry |...
5 Steps You Must Take to Be Successful...
Making of The Artificial Eye best to know...
Increase CPC for your Website | make money...
What Is Bitcoin and Blockchain Technology? A Quick...
15 Important Travel Techs For Travelers | 2018
Once homeless, now on his way to Harvard...
U.S. Energy infrastructure On Cyber-Security after Alert Issued...
Why I feel so alone | Does technology...
Electronic Engineering

A robot is defined as a mechanical design that is capable of performing human tasks or behaving in a human-like manner. Building a robot requires expertise and complex programming. It’s about building systems and putting together motors, sonar sensors, and wires, among other important components | Final Year Project for the Students of electronics and communication eng | Electrical Engineering. 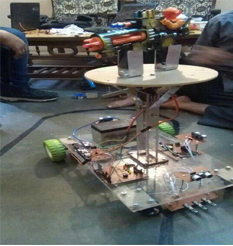 This paper covers the design and construction of a robot that is able to sense the enemy. This robot implements the following concepts: environmental sensing, proportional motor control. This robot processes information from its various sensors and key hardware elements via a microcontroller (Arduino mega). It uses sonar sensors to detect the fire accident. A robot capable of sensing the enemy and shoot it. Sonar sensors will be used for initial detection. Once the enemy is detected, the robot will automatically turn on its buzzer within seconds, the robot activates and starts firing towards the enemy. The project helps to generate interests as well as innovations in the fields of robotics while working towards a practical and obtainable solution to save lives and mitigate the risk of property damage.

The project comprises of a wirelessly controlled hierarchy of the robot as it is controlled through the commands of the Bluetooth device that controls the movement of the robot. The robot is a completely remote and provides a full view of the area that is to be controlled.

The main goal of the project is to provide safety to the area those can’t be controlled by armed forces. Hence this robot can enter those places due to its size and ease of control.

Objectives:
• Provide a remote monitoring and controlling application for analysis.
• Allow the user to manipulate the enemy using the robotic arm.
• To provide visual feedback for the place under security.
• To provide a very user-friendly control application.
1.3    System statement of scope:
The Robot uses a control application, at the user end to control the robot remotely using Wireless technology. Input from the user is transmitted serially over a Bluetooth device to the Robot, where it is received, identified and relayed to the appropriate module.
·         The input to the system is from the user for the movement of the robot.
·         This input is first processed by the control application, serially transmitted over a Bluetooth Link. This input is then received at the robot and processed again.
·          The output of the system is the processed signal to the appropriate module. This module can be a motor of the base of the robot.

·         Input Signals
·         Movement of Robotic Arm
·         Movement of the robot.
We have designed it as an assistant robot to security team but there are a number of other applications of this robot.
It can be used by:
• Police: In hostage situations
• Military: For reconnaissance missions
• Air bases: It will be used for handling hazardous or radioactive materials.

The robot is practically tested and verified. The tests include the efficiency of the designing robot sensing system and its performance.

   Chapter 6: Conclusion
Finally, a conclusion on the obtained results is presented. This also includes the novelties within the work and suggestions for future work.

Hopefully, this article will help University students who are doing bachelor or masters in electronics and communication eng.
Kindly Contact Us For Full Thesis Report

How Nuclear fusion occurring inside large air bubbles of a gas