Top Posts
Making of The Artificial Eye best to know...
Increase CPC for your Website | make money...
How Wireless Charging Works for smartphones | Circuit...
Apple Watch launches a new ECG Feature to...
Cyber Security Concerns For Bitcoin as the Price...
Austin Texas is a next Future Tech giant...
U.S. Energy infrastructure On Cyber-Security after Alert Issued...
Revolution In Electric Vehicle upto 2018 | Electric...
Crises of the Semi-conductor industry and its Root...
CTRL-Kit: The First Mind-Controlled Armband and its Demonstration
Electrical Engineering

The data used in the article is based on studies conducted by Excelsys and Power Clinic (who has collected data on power supply failures from over 12,000 models sent in from over 1600 different companies). It also takes use of a study done by Dr. Ray Ridley of Ridley Engineering based on input from his LinkedIn “Power Supplies” group. This group hosts over 6,000 members.  This data is based on all types of electronic systems used in industrial, medical, military and scientific fields.

Over time, we’ve seen an increase in the use of plastic chassis as compared to the metal chassis, which has an impact on thermals as well as electromagnetic capability. You aim should be to correct thermal management around your power supply system.

Nearly all capacitor technologies have some flaws if not properly designed. Capacitors can easily get overstressed and are prone to failure. Capacitors can fail due to a number of reasons and hence cause your power supply to fail. This may include leakage, swollen capacitors, and explosions or short-circuits, reduced capacitance or increased-in-circuit ESR. Excess heat also causes capacitor damage along with aging, reverse polarity damage, damage during assembly etc.

In order to avoid failure due to capacitors, you must ensure your power system is using high-quality capacitors. Keep your capacitors free from over-heating watch ripple currents to ensure they are not over-stressed.

Power switching components or MOSFETs are also a major part of power systems and can sometimes be the cause of failure. A MOSFET (Metal Oxide Semiconductor Field Effect Transistor) is a three-terminal device with source, gate, and drain. It is used for amplifying and switching electronic signals in an electronic device.

The power MOSFET is a very commonly used power semiconductor device used especially for the DC-to-DC switching power supplies. They can cause failure if the heat is not properly disposed of, if the drain overvoltage, drain overcurrent, gate overvoltage, or the internal antiparallel diode is overstressed. The focus should be proper designing, and derating of components and testing in order to ensure your device does not fail.

Control ICs can easily be misapplied or misused and so affect your power supply. This may be because of incorrect clock operation or improper PCB layout which can cause unwanted noise or oscillation. You have to give due attention to current limiting, gate drive, spacing, soft-start modes and measuring the control loops.

If there is a flaw in your IC it will directly affect the MOSFETs, therefore it is important to make sure your control IC does not fail. 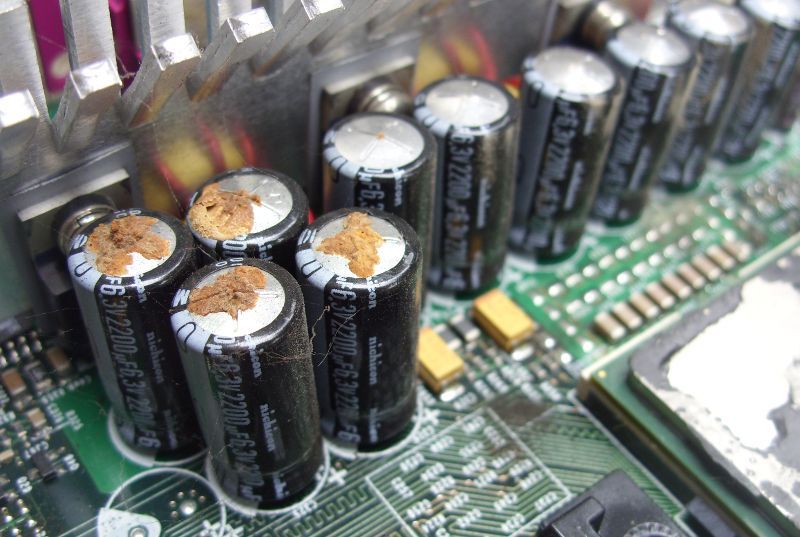 Some of these failures due to environmental effects can be avoided by proper design and testing or by adding protective extensions to your systems.

This shouldn’t come as a surprise, fans are found in most systems. They are the physically moving part incorporated into power supply systems and are actually more prone to faults and failures. Fans are used to diffuse heat produced from a system so as to avoid over-heating. Users will themselves add fans to a system in case the system doesn’t come with pre-installed fans. However, even then, the issue does not absolve but rather shifts from one position to another. Another problem is the production of substitute fans in the supply chain. You need to make sure that your power supply system being provided is free from such substandard substitutes.

On the other hand, keeping a fanless system has its benefits. You can seal a fanless system from moisture and dust. In the case of the installation of systems outdoors, you can seal it from moisture and rain. Removing the fan can increase the reliability of your system by 25% and can help you avoid failure. Try to avoid a fan in your power systems unless it’s necessary. Excelsys has actually released a fanless power supply system that offers 600 W of output power.

There are tons of other causes of power supply failure out there but these are the most prevalent ones found. To avoid these, you need to make sure you power supply system is given due attention right from construction and designing. Try to use legitimate components that have been tested beforehand or look for suppliers who offer warranty.

Introduction to Grid Station and How Electric power...

Why is Power factor so important in Electrical...

What is Grounding in term of Electrical Engineering...