Ransomware has recently received a lot of attention, especially in the news. You may have heard stories about ransomware attacks on firms, organizations, or government bodies, or you may have already been a victim of a ransomware attack on your own device. Having all of your files and data kept as a prisoner until you pay up is a serious concern and a terrifying idea.

Ransomware is still a severe danger, despite recent decreases in ransomware attacks. If you want to understand more about this issue, keep reading this article to learn about the different types of ransomware, how to receive it, where it comes from, who is its targets, and how can it be defended against.

Ransomware malware also called ransomware, is a type of malware that prevents users from the gain access to their system or private files and orders ransom payment in order to regain access, hence it is called ransomware. In the late 1980s, one of the first ransomware variants was created, the payment for the information retrieval was delivered through snail mail.

Today, ransomware developers demand that payment is to be sent via cryptocurrency such as bitcoins or through credit card or the victims’ data shall not be restored, they attack individuals, firms, and organizations of all kinds. You may have heard of RaaS which means Ransomware-as-a-Service, it is a service in which ransomware developers sell the service to others.

How does ransomware work?

Ransomware is easy to avoid if you know how it works, there are numerous ways for ransomware to take control of a computer. One of the most common approaches is phishing spam, in this method an attachment is sent to the victim via email, posing like a file they would trust.

Once it is downloaded and opened, it will then take over the victim’s computer, if they possess built-in social engineering tools that deceive the users into giving administrative access. Some more assertive types of ransomware such as NotPetya takes advantage of security holes to spread within the device without needing to deceive the users. 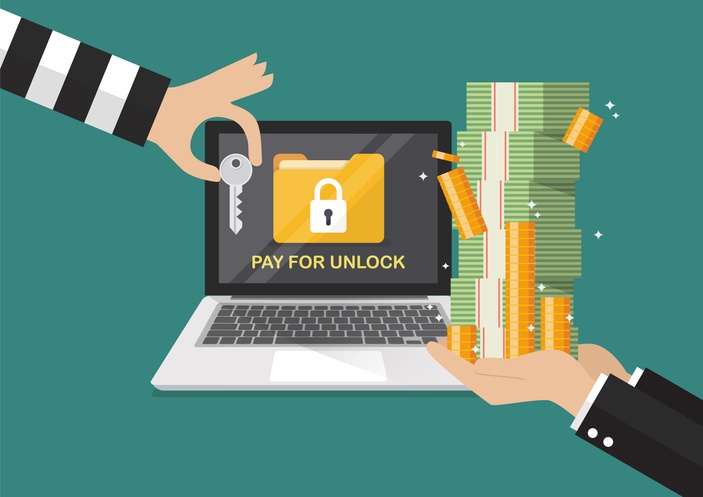 There are numerous things that the malware might do once it took over the victim’s device, but the most common course of action a malware is instructed to take is to encrypt the user’s data. But the most crucial thing to know is that when the process ends, the files are encrypted and cannot be decrypted and used without a key that is only known by the attacker.

The user is then shown a message describing that their data is now encrypted and is inaccessible it will only be given back or decrypted if the victim sends payment to the attacker, but that is only the most common there are several types of ransomware, and they all differ.

In some types of malware, the attacker might be claiming to be a law enforcement body and then shut down the victim’s computer due to the presence of unlawful activity or pirated software on it. Then they demand payment calling it “fine” which makes it less likely for the victims to report the attack to proper authorities.

There is a variant of malware, called leak warm or do ware, in which the attacker demands that a ransom should be paid during a certain time or else, the attacker threatens to make sensitive data on the victim’s hard drive public. However, because locating and extracting such data is a difficult task for attackers, encryption ransomware is used most often is the most common type.

Once ransomware has infected your device it will keep making problems for you, until you regain control of your device. Some super effective methods are as follow,

However, bear in mind that while following these procedures will remove the malware from your computer and return it to your control, it will not decrypt your data. Their transformation into unreadability has already occurred, and if the virus is smart enough, decrypting them without access to the attacker’s key will be almost impossible. In fact, by deleting the malware, you have eliminated the chance of retrieving your files by paying the ransom demanded by the perpetrators.

Khuzam from Karachi, Pakistan. I'm currently studying Computer Engineering at Sir Syed University. I am interested in learning more and improving my skill sets, aside from that I am also interested in the latest technologies. I have also learned some programming languages and still learning more.