Top Posts
Increase CPC for your Website | make money...
Making of The Artificial Eye best to know...
How Wireless Charging Works for smartphones | Circuit...
Cyber Security Concerns For Bitcoin as the Price...
Apple Watch launches a new ECG Feature to...
Austin Texas is a next Future Tech giant...
Why I feel so alone | Does technology...
Revolution In Electric Vehicle upto 2018 | Electric...
Crises of the Semi-conductor industry and its Root...
Smart plugs and The Smart Home Revolution |...
smartphones

Impacts of Cell phone addiction-how to limit its influence?

We may all believe that we have a life without our cell phones, but how much are we really living? Being glued to a screen rather it cell phone, laptop of TV is can be referred as an addiction. Screen or Cell phone addiction is real. Its impacts are slow but constant. Some people think that it’s just another add-on to their life. But, the truth is that cell phones have become an integral part of our lives. It is so prevalent in many parts of the world that we think about it as if this is an innate right.

Are we getting far from reality?

People can spend months on end without thinking and losing sight of reality. So many things can happen on the go when you have your cell phone around your neck. One thing that must be clear was the impact that the use of mobile phones has had on teens’ physical and mental well-being in particular. Teenagers can become bored with what they are doing, so instead of being present in reality and interacting with others, they turn to technology, and then they eventually give up the whole idea of ever leaving the house and interacting with people.

In recent studies, some were found to have their attention span reduced by 50%, which means their ability to pay attention. They are also at risk of having severe mood disorders when they are using cell phones too much. The constant stream of notifications comes from the fact that many other people’s phones are constantly flashing their apps and updates. Then there’s the cost of owning a cell phone and what others will think of you for keeping one, and how many advertisements there will be. This could affect teenagers’ decision-making abilities and make them feel like they need to keep getting new accessories to keep up with social media.

The research by A. A. Iyer, M. C. S., & P. C. Vartanian, W. M. (2008) conducted research to know the effects of mobile phone use among young women. He also found that the use of such gadgets as mobiles, laptops, etc., reduces the time that girls/boys spend with their families.

There are also reports of suicides among teen girls using their phones when talking with friends online. Not only does this waste time and energy, but these kids also don’t understand the reality in their own homes. A lot of them are trying to meet the standards of society in which cell phones exist. Instead of communicating when you need to talk face-to-face, you just scroll through it and see as many different faces as possible. Technology doesn’t always have to give any answers, you just have to trust the information that comes in through the screen. 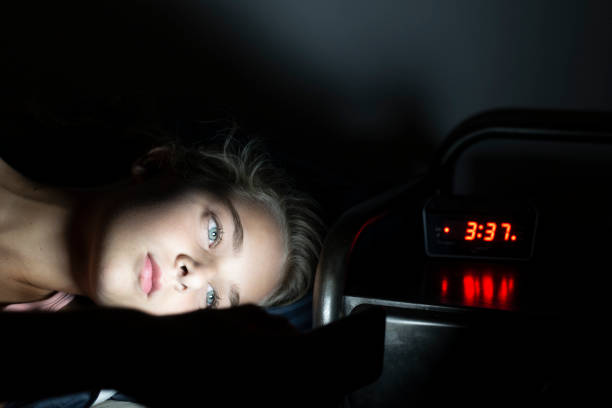 Young teenage girl in bed late at night using her smartphone. Can’t sleep or addicted to mobile or social media.

Lack of Enforcement of good parenting

Parents must be aware of the effects this might have and find ways to control their children from spending so much time on their tablets or smartphones. Reduction in parental participation helps them develop negative habits likewise in men. Being young at heart and seeing their parents struggling to keep up with texting and tweeting while having fun on social media makes adolescents grow apart. It makes them feel like they don’t have a place in society because they aren’t interacting with others every day or having the same social experiences. 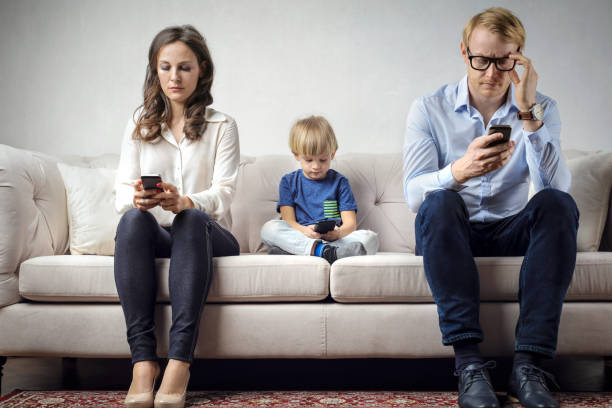 Young family is sitting on the couch and using mobile phones

The majority of the population thinks their parents know more than anything about what is best for them, and then you see that they are actually not paying attention to their kid’s social needs. And that can lead to depression and anxiety. By constantly being connected to cell phones you have to be alert and on top of everything. Kids with laptops or cell phones often show less empathy and patience in real life.

We live in the 21st century, and you wouldn’t allow your kid to go outside until he/she has the latest iPhone. And there are lots of consequences to not having one like bullying, inferiority complex etc. We have the choice to use cell phones or not. No one really knows what the long-term effects of excessive use of cell phones are, and how it affects our mental health. 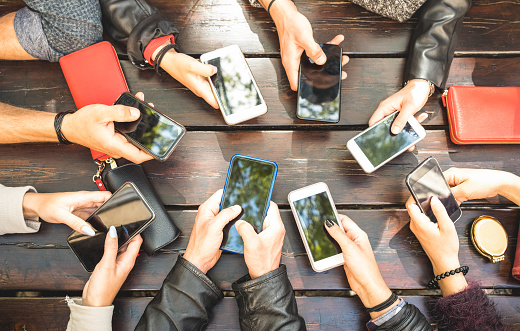 Our generation had to start adapting to the idea of not having their phones on them so they would have more time to think. All of those wonderful social networking sites, and applications, of course, made our youth vulnerable. Yes, it seems that the younger generations are taking advantage of all this modern technology, but it is becoming harder and harder to ignore.

How we can reduce the harm?

If we take a look at the situation regarding our cell phones, we now know why people have gotten addicted to them and how bad it can be for them. There are many ways to deal with this. Here are some ideas that can help curb this trend and avoid consuming too much social media and cell phones:

As humans we have the freedom to speak our minds and to be who we want to be. When someone tells us to sit at home because they’re not going anywhere, or they’re working from home they are really looking for an escape. Many people think that when you have your cell phone it means you can do whatever you want with it, and they are able to get anything they want when they want. Or they think that if they have their cell phone, they can get away from everyone. Unfortunately, their imagination runs wild and often leads them into dangerous situations and sometimes even crimes. In this respect, we need to think roader, even broader than our cell phone screens, which we are addicted to. Technology should not command us instead, we should be the ones who take it under control.

Make E-Commerce Store in PrestaShop for Free in 2022

QMobile Energy X1 OR X2 Which One Should...