Talk to books: All you need to know about Google’s new update

Google has always tried to provide us AI-based technology. Using artificial networks to process and sort data almost like a living brain which helped to bring accuracy to results and user-friendly experiences. Google’s latest achievement “Talk to Books” uses AI in this very aspect. 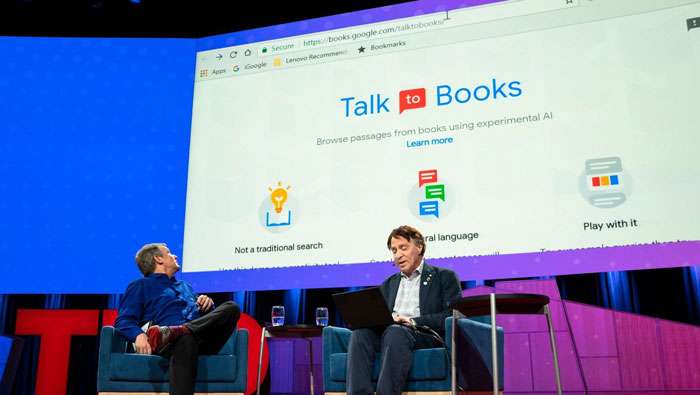 On April 13th American author and futurist Ray Kurzweil, while talking to Chris Anderson of TED Talks introduced “Talk to Books”. Ask any question and this tool uses semantic searching to gather relevant information from over 100,000 books that could answer our question.

“Talk to books” is almost like an upgrade to Google’s “smart reply” feature. It is developed using word vectors to learn about links between words in sentence structure in everyday language usage, hence making its results as human-like as possible. Recently Ray and his team developed “Semantics”, a word association game, which predicts words that are interlinked semantically.Talk to Books will answer your questions, and give you a list of references from books that might relate to each other. For example,

when asked “What policies can help the middle class in America?” here are the results that appeared:

..poverty alleviation in the nearer term. Various social safety net programs (such as nutritional and health assistance and emergency employment), if well designed, can relieve the impact of adjustment on the poor and the lower middle classes without breaking national budgets. In some countries, such as El Salvador… (view in a book) from Developing Democracy: Toward Consolidation LarryDiamond

Interestingly, policies to shore up the growing instability of America’s middle class, such as improved access to quality education, good jobs, adequate health care, and reasonable retirement savings, are also essential for the upward mobility of lower-income and minority households. As we note in Chapter 1, an enduring… (view in a book)from Segregation: The Rising Costs for America James. Carr, Nandinee K. Kutty

When we typed in “Can AIs have consciousness?” the following results appeared:

Since we are not certain what constitutes consciousness, it is hard to know whether or not machines can possess it. At the least, it seems likely that machine consciousness would be different from human consciousness (Levy 2006, 378) but that does not mean robots cannot have it altogether. (view in a book) from Apocalyptic AI: Visions of Heaven in Robotics, Artificial Intelligence, and … by Robert M. Geraci

…well as the capabilities for self-evaluation, self-programming, and self-repair. Based on most definitions of consciousness (see Table 4.1 in Chapter 4), AI systems have either already achieved or could conceptually achieve consciousness. That attained level of consciousness is not limited to the primary capacity of… (view in a book) from Dream Science: Exploring the Forms of Consciousness by J. F. Pagel

Primarily, this tool focuses on giving a broad range of answers and make them sound as if spoken by a living person. The only drawback would be there is no limit to the results and hence, sometimes the referenced books might be out of context. But Google says this will help you discover “unexpected” authors and titles. Basically broadening your results, and helping researchers.