Top Posts
Increase CPC for your Website | make money...
Making of The Artificial Eye best to know...
How Wireless Charging Works for smartphones | Circuit...
Apple Watch launches a new ECG Feature to...
Cyber Security Concerns For Bitcoin as the Price...
Why I feel so alone | Does technology...
Austin Texas is a next Future Tech giant...
Revolution In Electric Vehicle upto 2018 | Electric...
How do Autonomous Vehicles work? | Automation Levels...
The Future Of Warfare: Military Robots
Raspberry Pi

What is Difference Between Arduino and Raspberry Pi |Solution

You Probably Looking for an Answer that What is the Difference Between Arduino and Raspberry Pi So Here is an Answer !!! 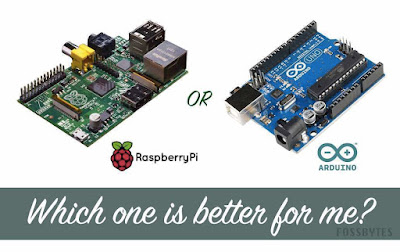 Many leading projects require the use of development boards, they are the backbone of modern electronics. Which board needs to be used and where is what you need to be aware of. Two of the boards which I’m going to discuss today are “Arduino” and “Raspberry Pi”, What is the difference between Arduino and Raspberry Pi and which are the most popular boards among students. Beginners find it hard to distinguish between which boards to use? and why is one board preferred over the other in certain situations? This article will help you to decide between the two.

Arduino is a microcontroller motherboard which provides a platform for building hardware and software systems and it is considered as one component in a computer.  Arduino performs low intelligence tasks and it can only be assigned one program at a time. Such as:
Arduino does not function on an operating system. Arduino is a very simple motherboard. It cannot be connected to any external devices and contains only a small amount of storage memory. It does not have any keyboard or mouse input or video output. The Between Arduino and Raspberry Pi is explained in details in this topic yet not finished, The solution continues to choose one over other below.
Raspberry Pi:
Raspberry Pi is commonly known as a general purpose full-fledged computer and can perform tasks like your desktop Pc. You can push your limits in coding and circuit making using Raspberry Pi. Raspberry pi is used to perform higher-level processes and it can be assigned multiple numbers of tasks at a time. Such as:
Unlike Arduino Raspberry Pi runs on an Operating System called the “Linux” Operating System which is specifically designed for it and is known as the Rasbian. However other Operating Systems like Windows 10 or Android can also be installed on Raspberry Pi.
In Raspberry Pi, you can interact with your program using external devices such as a keyboard and mouse, and you can also plug in a display. You can easily get access to input/output pins and can connect all types of devices including buzzers or whatever you may require.
Why Should You Use Arduino:
1) It is very simple to interface electronics equipment and the coding itself is much simpler than raspberry. Without the need for networking.
2) It operates on a wide range of voltages and it requires less power.
3) Arduino can be easily turned ON or OFF without any risk of damage.
4) It’s much cheaper.
5) Simple projects such as building a home automation system are much easier with Arduino where you do not to get to complex.
6) There is no Linux and software hectic.
Why Should You Use Raspberry Pi:
1) It is more complex and can carry out intense tasks like building a complex robot or turning on and off hundreds of lights in equal intervals, or if you’re making a web server then Raspberry Pi is necessary.
2) Networking is provided via the Ethernet port present in the chip. So you can access the internet, Bluetooth or Wi-Fi.
3) Raspberry Pi is 40 times faster than Arduino.

4) You don’t have to waste your time going through programming languages, all you need is basic electronics knowledge.

Learn How does an AC generator work in Simple Words

Getting Started on your Raspberry Pi | Quick...

Using the DHT11 Sensor with Raspberry Pi to...

How to Interface RGB LED with the Raspberry...