Top Posts
Increase CPC for your Website | make money...
Making of The Artificial Eye best to know...
How Wireless Charging Works for smartphones | Circuit...
Apple Watch launches a new ECG Feature to...
Cyber Security Concerns For Bitcoin as the Price...
Why I feel so alone | Does technology...
Austin Texas is a next Future Tech giant...
Revolution In Electric Vehicle upto 2018 | Electric...
CTRL-Kit: The First Mind-Controlled Armband and its Demonstration
What Is Bitcoin and Blockchain Technology? A Quick...
Learning EducationPhysicsTech News

The National Aeronautics and Space Administration (NASA)is working in collaboration with SpaceX to launch its new Crew Dragon astronaut capsule which is set to go for its first manned test flight into orbit by the first quarter of next year provided “everything goes according to plan” in upcoming tests says NASA chief Jim Bridenstine.

A total of $6.8 billion is expected to go into this design. Previous testing had resulted in an explosion in April and there were also some technical issues with the re-entry parachute system. This project will help set them back on track to launch a manned space mission for the first time since the space shuttle program (2011).

The NASA administrator also had a visit to the SpaceX headquarters in Hawthorne, California, where Elon Musk led hum on a tour of the manufacturing plant. The new revised timeline is set on a series of tests SpaceX hopes to conduct by this year’s end, says Bridenstine. They include a high altitude test of an in-flight abort system which is designed to propel the crew capsule to safety in case of a rocket failure after launch. There is also a series of 10 mid-air ‘drop tests’ to test the parachutes used to slow the capsule’s descent to the ocean after it re-enters the atmosphere.

SpaceX has never flown humans into orbit, only cargo. A few months back in March SpaceX had successfully launched an unpiloted Crew Dragon to the International Space Station. The two astronauts now set to fly aboard the Crew Dragon are Doug Hurley and Bob Benkoe.

Get the Parachutes right

Elon Musk says getting the parachutes right is integral and is a very ‘arduous’ job. He also added that the parachutes will have ‘twice the safety’ as those used in the Apollo 11 era. He also expects testing to be complete by the end of December. 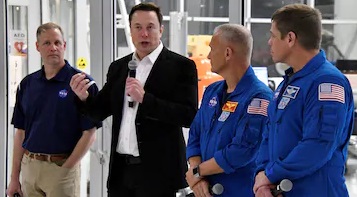 Musk and Bridenstine also provided details on the investigation into the explosion during capsule ground testing in April. Musk said that incidents and setbacks were inevitable during complex processes and rigorous testing.

The visit had followed a spat between Musk and the NASA chief over the delay in the mission not to mention the strained relationship NASA and SpaceX have had at times in recent years but we’re definitely seeing them on the same page for now.

John Mulholland, the top executive for Boeing’s rival Starliner program held a conference on Wednesday where he stated that their own key test of an abort system that propels astronauts to safety during an emergency was slated for November 4th. On the other hand its unpiloted orbital test flight was set for December 17th. Under this time frame it is certain the first Starliner manned mission is going to slip into 2020.

Currently NASA has no means of flying astronauts into orbit from US soil so it’s playing Russia around $80 million per ticket for rides to the space station. Bridenstine commented on this saying NASA was still ‘buying seats’ for ride-alongs aboard Russia’s Soyuz as an “insurance policy” against future delays in the crew capsule development.

How Smartphones Are Affecting Your Brain and Body – 2020

Make E-Commerce Store in PrestaShop for Free in...